NORMA’S WAY WITH — AND WITHOUT — WORDS

The first set in this double bill was still showing on the small television screens in the MRC foyer when I arrived about 9pm. As I listened and watched the very poor quality video image, I decided this set would have been a trial. Kurt Rosenwinkel‘s trio seemed to playing without much variation and playing on and on. Then I heard a prominent musician in the foyer comment that this band ought not to be going on this long because “they’re not that good”. And, as patrons flooded into the foyer at set’s end, there were plenty who agreed that quantity was no substitute for quality. I decided it had been a good idea to take the call from Europe and arrive late.

Now for the second set. Norma Winstone came highly recommended, and since this concert I have heard only positive feedback from those patrons I’ve met who heard the set. But I have had to respond that, while Winstone as a package with Gesing and Venier worked well, her vocals did not set the world on fire as far as I was concerned.

Let me digress. On John Mayall‘s fantastic drum-less album The Turning Point, a track called Room To Move featured Mayall making rhythmic, percussive sounds with his mouth close to the microphone. I always recall his words, on the recording, saying, “There’s a bit of chicka chicka on this one.” I loved that track. But that’s as far as my love affair with mouth percussion extended. Since then, I find myself reaching for the forward button when a vocalist moves into scat mode.

That’s a personal foible, but, as I listened to Norma Winstone, it was her lyrics and singing of words that moved me more than her wordless contributions. Winstone began with a 13th century ballad, moving seamlessly into Hoy Nazam’s Cradle Song. Then came Giant’s Gentle Stride, dedicated to John Coltrane, in which Gesing’s soprano sax was exquisite with Winstone’s vocals. Gesing’s bass clarinet was so smooth to enter Just Sometimes, an Argentinian composition to which Winstone added moving lyrics. But in Everybody’s Talking At Me, Winstone introduced what I dub “voice gymnastics” — I remained to be convinced that it helped the song.

Next, Gesing charmingly introduced Sound of Bells, based on a melody by French composer and pianist Erik Satie. It was very effective, and Winstone had great presence. In Rush, Gesing introduced some “popping” on bass clarinet, and Winstone indulged in more voice gymnastics. Winstone’s vocals in Among the Clouds called to mind Australia’s Gian Slater — and that is a compliment. This flowed into the Tom Waits song San Diego Serenade, which was my favourite of the set. Gesing initially played in a high register on the bass clarinet, before a great solo with some deep, raspy notes that were underscored with subtlety by Venier on piano. Winstone’s voice was agile in an exchange with Gesing on soprano sax, while the piano drummed beneath. This was a highlight, but I still wondered why there was a need for Winstone to stray into scat. 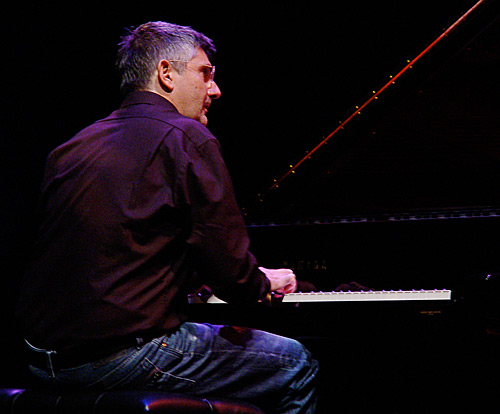 The encore was Slow Fox, in which Winstone’s lyrics told of a heartbreaking scene in which an elderly couple dance in the street. 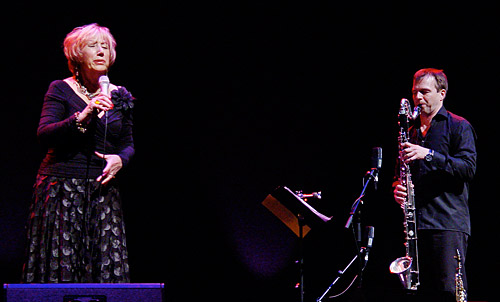 I think Winstone was warmly appreciated by her audience, and it is silly for me to let my issue with “voice gymnastics” colour my appreciation of this vocalist. However, though I believe Winstone, Gesing and Venier are an ideal musical combination, the vocalist impressed but did not excite.

2 responses to “NORMA’S WAY WITH — AND WITHOUT — WORDS”